Gyula, known as historical spa city, is located in the south-eastern region of Hungary, at a distance of 60 km from Orosháza.

Visitors can get to Gyula – a town with a population of 32 000 – easily, using the means of public transort, either by train or by bus. 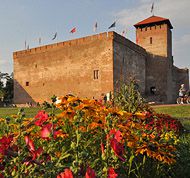 The main sights to see in Gyula – apart from the famous Castle Bath – include Gyula Castle, the downtown area nicely reconstructed a few years ago, the numerous fountains. Visitors can reach everything with a pleasant sight seeing walk. Among the famous personalities born in the city is the composer Ferenc Erkel who wrote the music for the Hungarian national anthem, he founded the Hungarian National Opera and composed the opera Bánk Bán. The Ferenc Erkel Memorial House,furnished in his birth house, can be found right next to the ‘Százéves’ Confectionery, the Hundred Year Old Confectionery.

The Gyula Castle Theatre offers unforgettable programmes and festivals for more than half a century. The audience can enjoy the performance of national and international artists. In summer time the teatre operates in the Castle, while in winter time the stage is placed indoors. Gyula is the town of festivals. Sausage festival is the biggest gastronomic and folk festival of summers. But pálinka and ham festivals are also popular, not to mention the historic festivals.

Talking about gastronomy: the long lasting traditions of meat industry are presented in the Museum situated in the neighbourhood of the Meat Combine of Gyula Plc, which is one of the oldest Hungarian meat industrial companies int he country. What else could be the souvenir taken home from this town than a pair of Gyula smoked sausages.